Tim has built many cars during his career and the photos below are just a snapshot of the kind of work he has completed.   Check out the projects sections for more photographs of some of the builds.

...Professional photos are copyrighted and shown by kind permission of Mike Key...  Copying or downloading any images from this site is strictly forbidden without our prior consent.

A dad and daughter project which took several years to achieve.  Hand formed body, sculptured interior and one off suspension all round.  Way too many modifications to mention.  See under projects for more info. 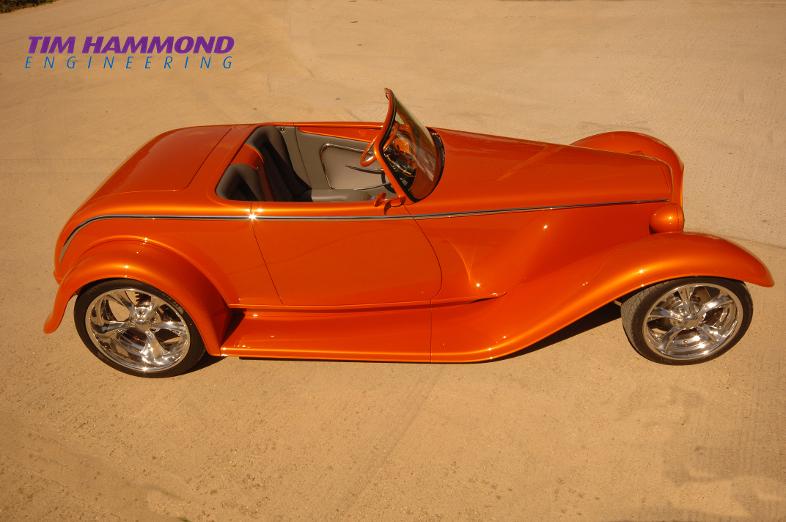 Found in a vicarage back in 1983 the project took 9 years in total to build (it spent a year in storage whilst Tim built the garage to house the car).  Chopped and channelled over the chassis with 100's of hand made billet pieces.  See under projects for more info. 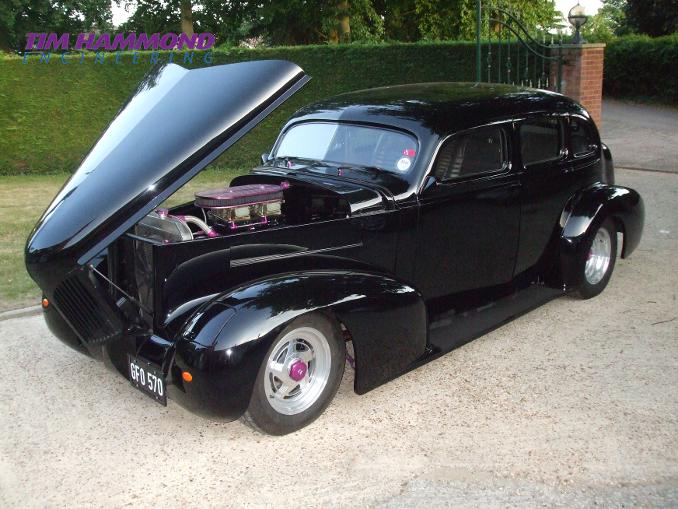 Tim put the vehicle all together, including wiring and finishing the truck.  Tim created the cantilever bonnet, exhaust, brake and fuel lines, stainless tank and fitted air ride.  See under projects for more info. 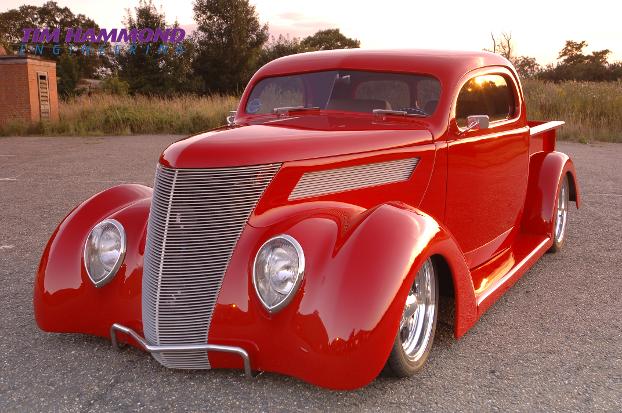 A total unique one-off creation based around a drawing originally done for the owner.  Body was made from aluminium by Bob Ford and Tim.  Chassis and car constructed by Tim Hammond Engineering.  Tim imported the first Inglese fuel system in the UK, which was extensively modified.  See under projects for more info. 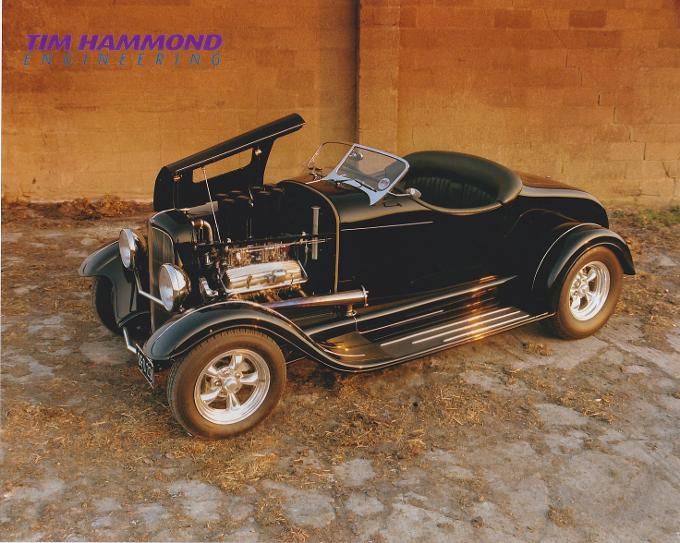 Built with economy in mind, this lovely little pop had all the high tech running gear, but a nice small engine to enable everyday driving.  See under projects for more info. 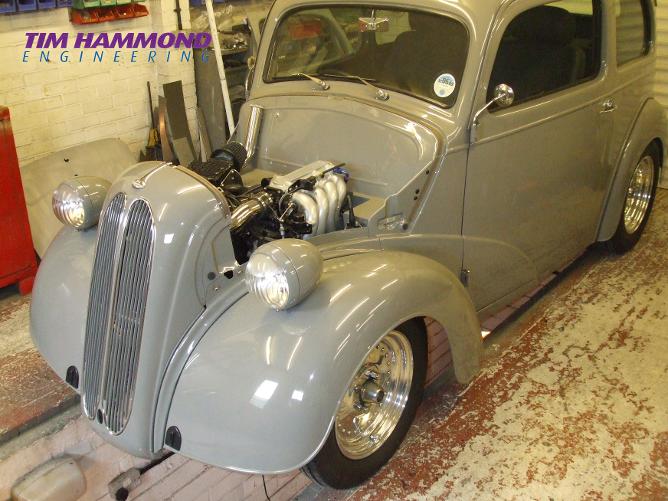 Originally only came to the workshop for brake lines, but 3 years later a completed car left.  Frank went on to win Best in Britain (twice), Participants Choice at Billing , Knebworth, and National Champion all in 2000.  Painted Boyd Red (special thanks to Boyd for giving us his paint formula code).  See under projects for more info. 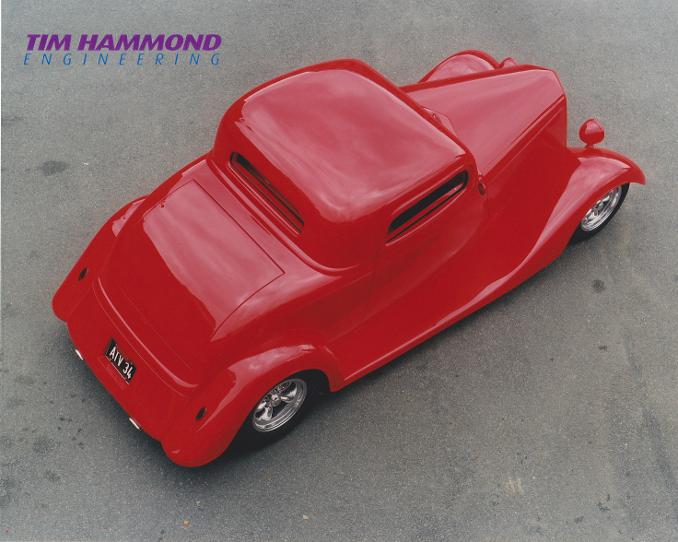 "Henry" was built to be driven using a GTO engine and gearbox.  Chassis and vehicle constructed by Tim Hammond Engineering.   A complete turn key (with the exception of the interior and paint), and a surprise handover to Liz was made at the Super Nats.  See under projects for more info. 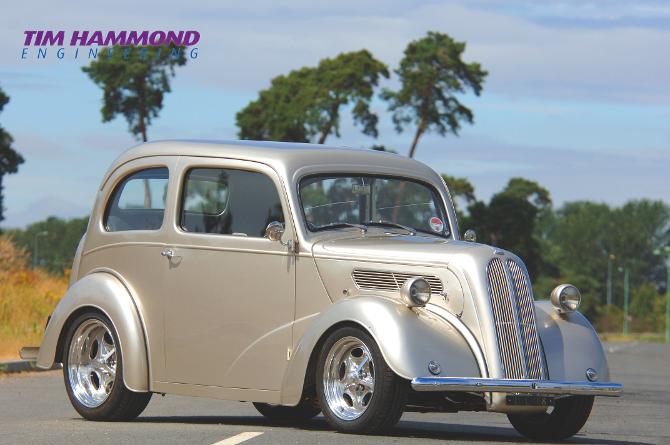 Tim  and Steve completed numerous body modifications (way too many to list) and modified the chassis.  Steve prepared and painted the car.   Tim finished the car off and completed all the wiring ready for the road, including a stainless steel grill insert.  See under projects for more info. 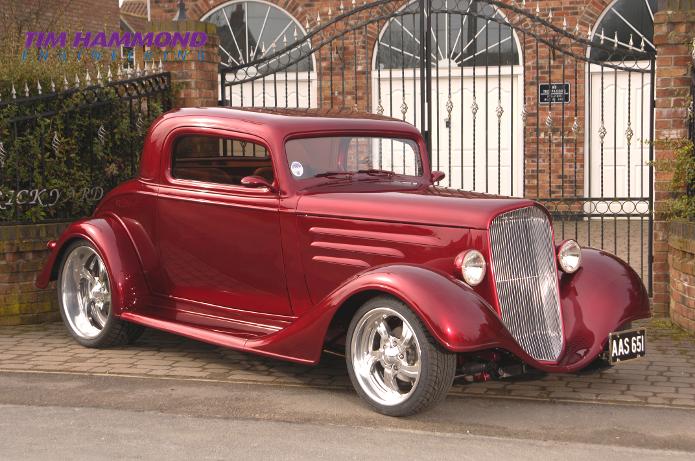 Chassis and vehicle constructed by Tim Hammond Engineering.  Best in Britain winner in 2008.  This was a complete turn key vehicle.  Way too many modifications to list.  Interior by Neil Tadman with sculptured fibre-glass dash and door panel moulds by Tim Hammond.  See under projects for more info. 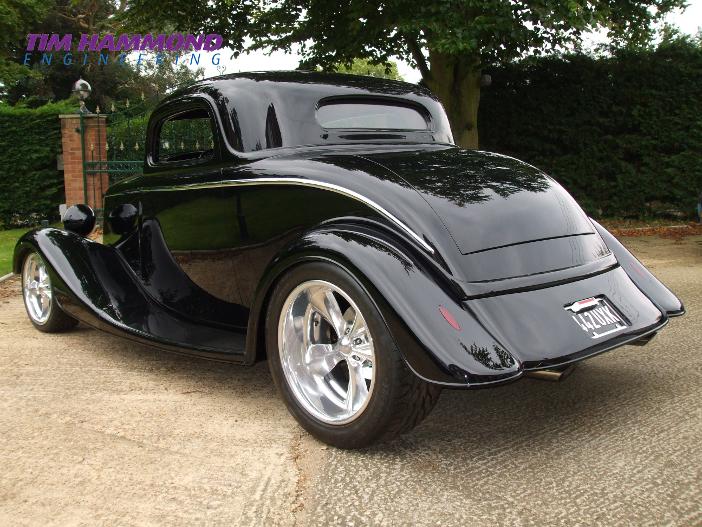 One-off hand built aluminium body made by Bob Ford and Tim Hammond, complete with hard top and fenders.  Chassis and vehicle constructed by Tim Hammond Engineering.   Vehicle has won Best in Britain title in 2009, 2013 and 2014 and many other best in show awards (including National Champion 4 times!)  Interior sculptured by Dan and stunning upholstery by Steve Hudson, which included having all the leather specially dyed.  Too many one-off parts to list.  See projects for more info. 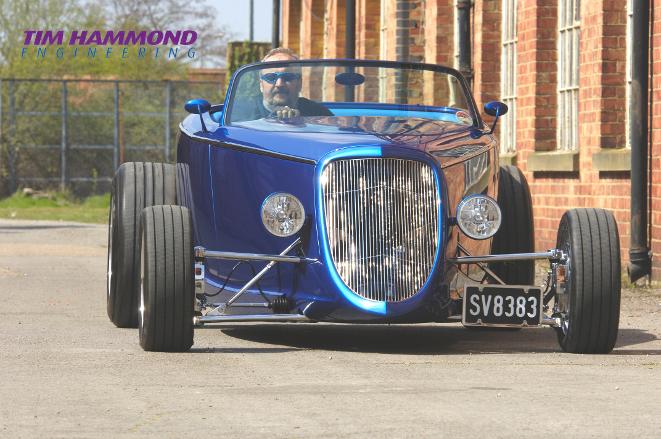 Tim modified numerous components on the chassis, body and interior - having decided not to do an off the chassis complete rebuild.  Car completely re-painted and interior finished off by Steve Hudson.  Vehicle was completely re-wired and air ride system sorted out, Ford 9" fitted with 5 link suspension and air bags.  New 200R4 gearbox installed for better fuel economy.   It was subsequently modified again.   See projects for more info. 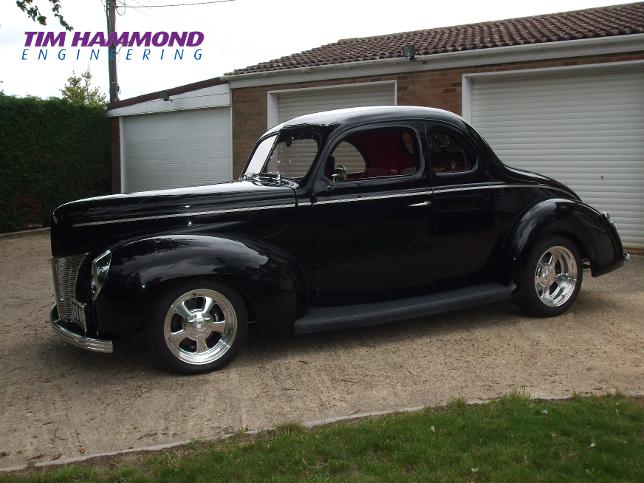 Asked by Teri just to finish off,  check the car and get it "roadworthy" - this included sorting the remote entry system, air ride, stainless exhaust, fire up the engine and fabricate a newfuel tank.  See projects for more info. 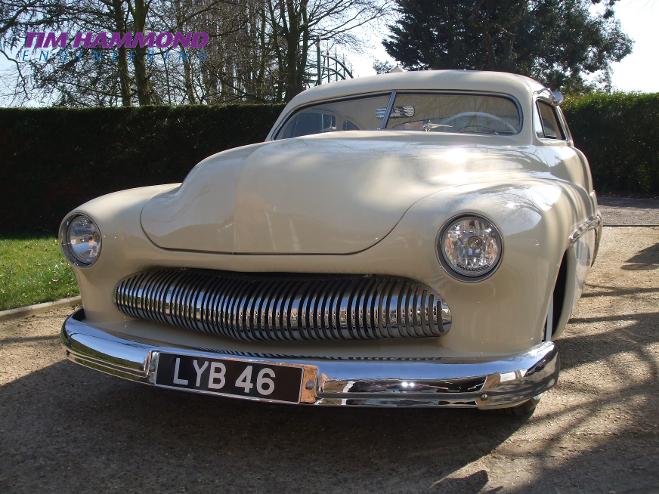 Gorgeous Woodie, constructed by the owner Steve and Tim.  Interior done by Gabe in the USA  when the car was shipped to States for interior and entered into the National Roadster Show in 2006 where it picked up the title of best street rod woodie and station wagon '46 - 62' and was personally invited to the Fresno Autorama show where it picked up the same award plus the Lee's Vintage Car Shop restoration award.  Tim built a complete new chassis, fitted an LS6 with a 6 speed manual, stainless steel top and bottom A arms, 9" rear end on stainless 5 link system, finished off with air ride on all four corners.  Tim completely wired and plumbed the car.  Tim and Steve worked really close to complete this car - each showing their own talents to the max.  If you get the chance, check out the woodwork on this car.  Steve and Tim had 2 weeks of intensive  16+ hours a day to put the car together in Tim's workshop so it made  it to the container in time for the US show!  Woodie came back to the UK and won Best in Britain.  See projects for more info. 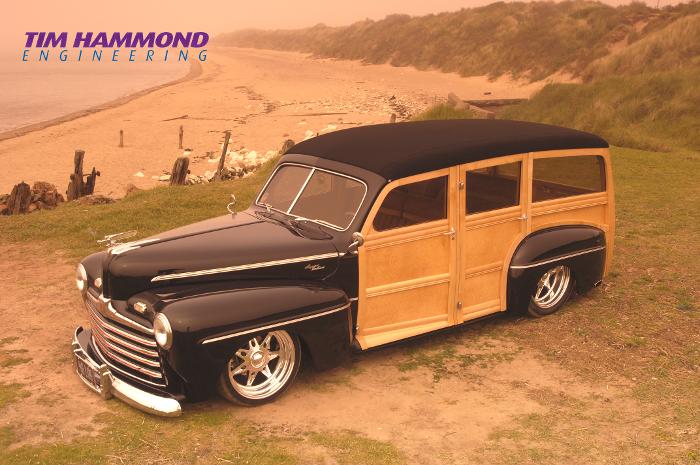 Largely built by Andy, it came to Tim to finish off some bits and pieces , including a replacement engineand get it on the road in time for his daughter's wedding and MOT'd.  Both achieved. 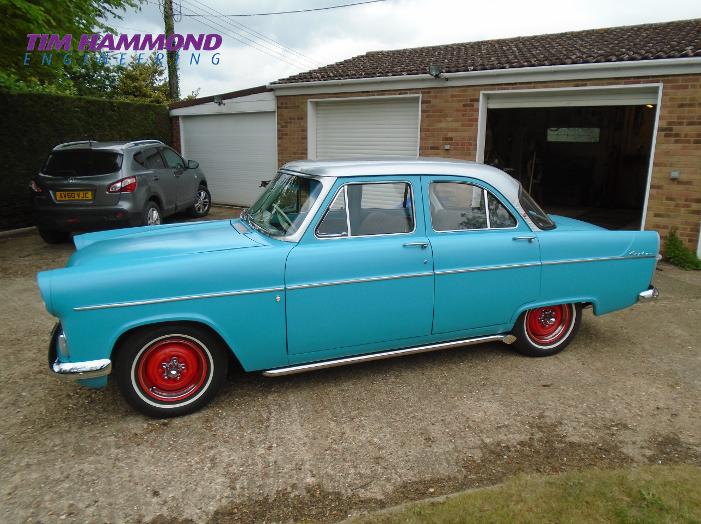 This lovely Riley has been in Bob's family since new.  Completely re-vamped and now sporting a 350ci Chevy and auto box.  See the project pictures for the build up. 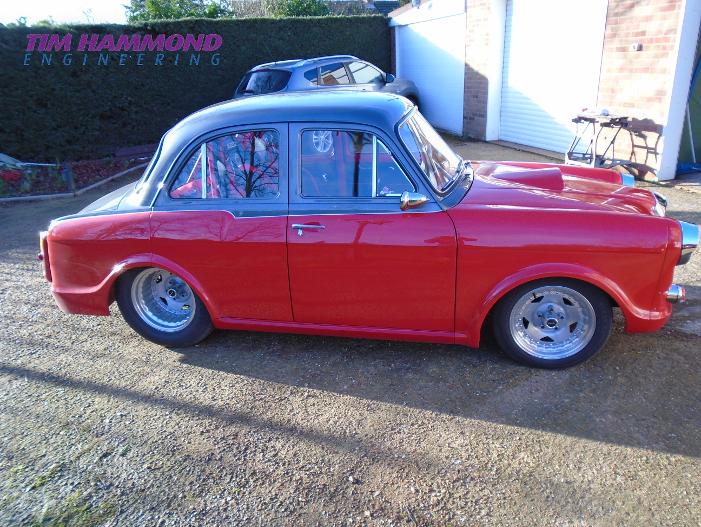 2015 saw the reveal of Stuart's Chevy Truck from Tim Hammond and at its first showing it took Participants Choice at Billing.  The truck was completely re-vamped, body re-shaped and fit tightened up - lots of modifications, including the original dashboard removed and a 57 Chevy Impala grafted in, chassis altered, air ride suspension added, lots of fabrication, re-wired, new LS1 engine and gearbox fitted, new paint scheme, and finished off with an amazing interior from Steve Hudson.  Check out the project section to see the build up. 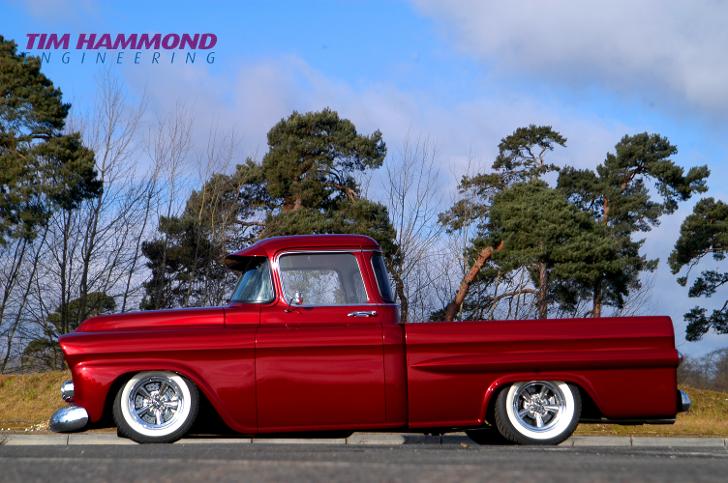 Chassis and running gear put together by Gary Layton, the pick up arrived at Tim Hammond Engineering for bodywork repairs and ultimately to be put together, wired and set up.   It picked up a Top 10 at the Super Nationals in 2018, has won a number of Best in Show awards and achieved 3rd place in Best in Britain 2019.  Numerous metal work, including new pick up bed and tailgate.   See the build up pictures. 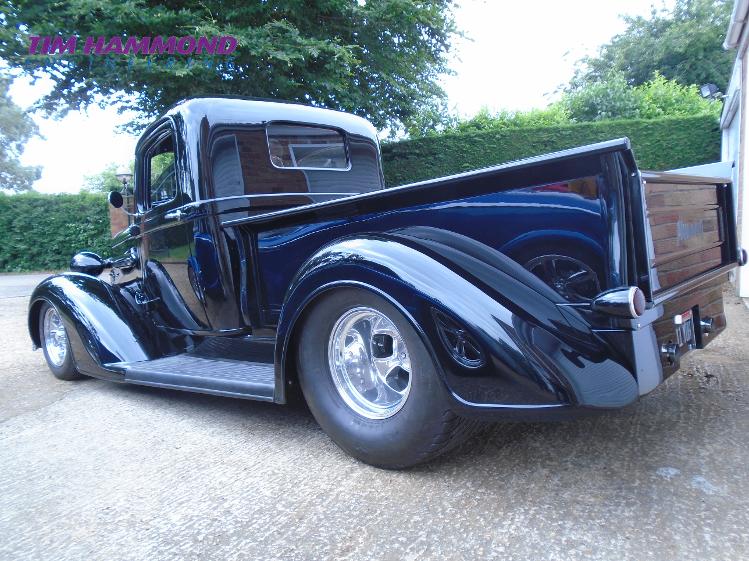 An all steel 1932 Coupe - created as a turn key, although paint and interior was completed elsewhere.    For more pictures look under the projects section. 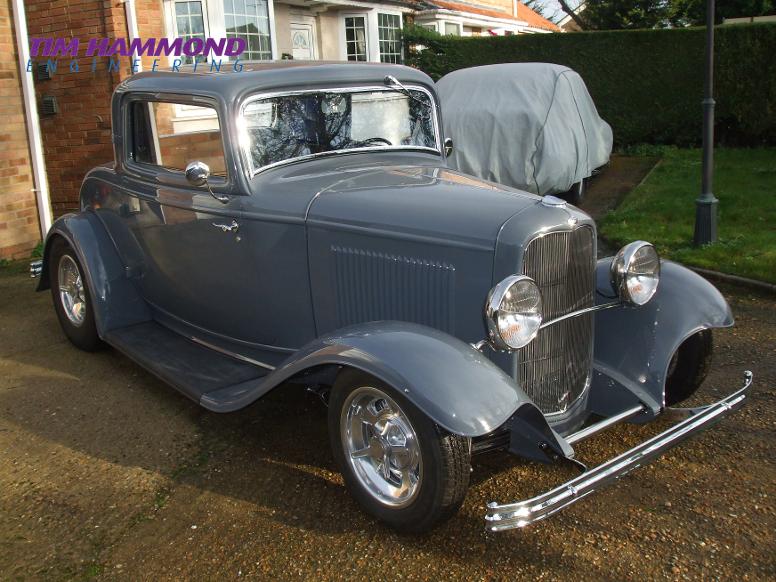 Originally the build began some 20 years ago, but the car came to Tim after the upholstery had been done to finish it off, complete the wiring and get it ready for the road.  Tim originally built the car whilst he worked at Wisbech Engineering 20 plus years ago. 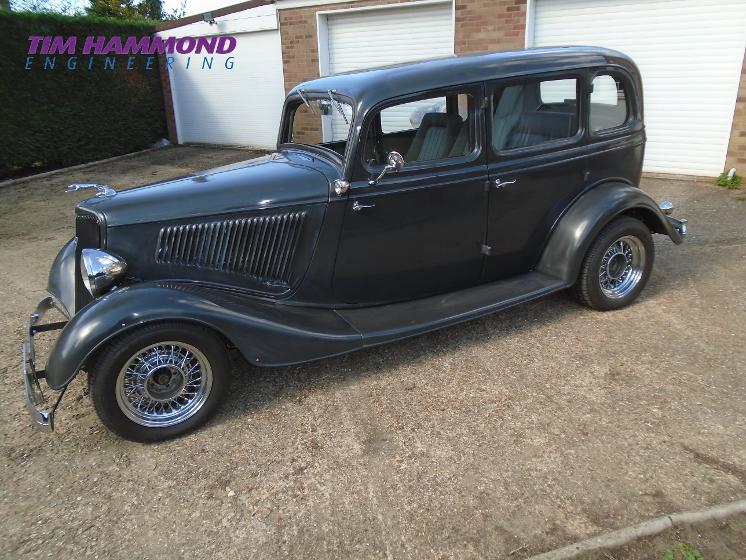 Originally built at Wisbech Engineering by Paul and Tim, Tommy decided that he wanted to revamp it, change the engine and so Tim rebuilt the truck.  Tommy had many years of fun driving the truck and then sold it to Colin, who added thousands of miles to it. 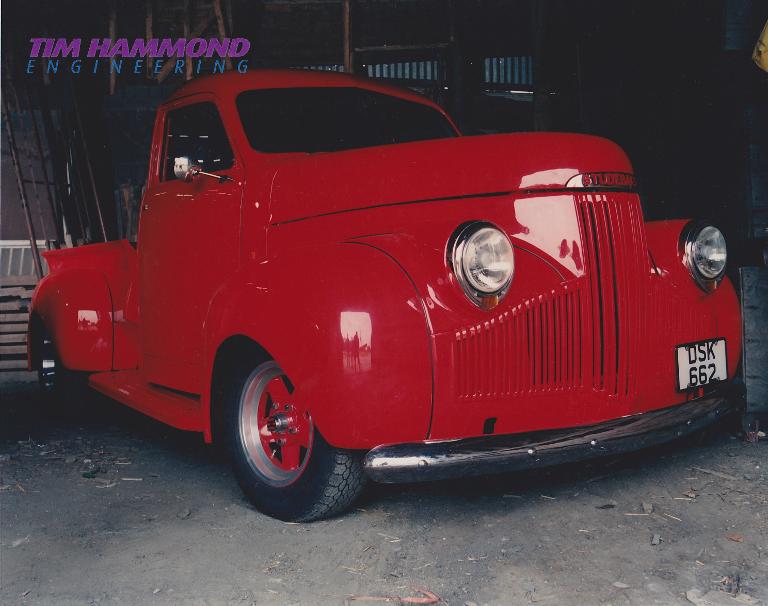